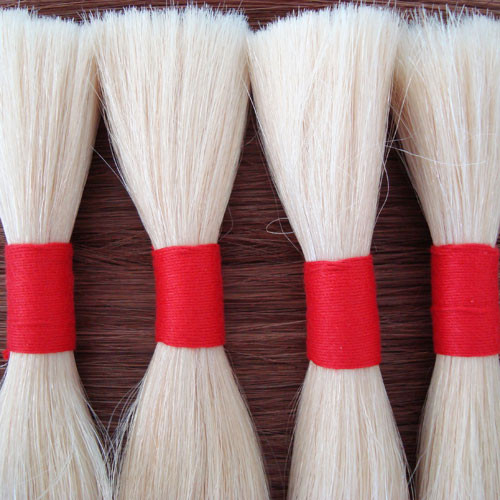 There are 50 grams per 1 packet

So let’s break it down, discuss what happened, why it happened and move forward together, perhaps draw a line and begin again.

Ten years ago those who dug deep could it even find Russian hair double-drawn in the true sense of the word while others were happy with ponytails and putting it through the double-drawing process themselves. As the years went by the prices continued to escalate and these days the going rate is as high as $3,500USD per kg for raw ponytails and even then lucky are those who find any virgin blonde hair contained within. Rising prices coupled with internet vendors saw stylists seeking it directly from Russian or Ukraine vendors. Choosing not to double-draw it (so as to minimize the short hair wastage) the wording “single-drawn” became commonly used, Its meaning is the short hair at the root end has been combed out.

The shortage of Russian hair websites selling more European hair than before. This hair was imported from India and intended to have its cuticles intact. Yes, Indian. European hair is not grown by Caucasians and hasn’t been for decades; rather it is supposed to represent a quality standard including intact cuticles in as much the same way as Russian hair. The exception being that European hair, being unavailable in light natural colors is bleached and re-coloured forced upon by its origin of color: Indian black hair.

European hair may or may not be the real [Indian] McCoy depending upon the preparation and processing. Just like there is poor quality Russian hair, grown by Russians, so there is poor quality European hair, grown by Indians. A bundle of best quality Russian hair could be easily destroyed by mixing roots with points (inverting it). The same applies to any full cuticle hair. There is no point of having the cuticle intact unless all the strands are root to point. Intact cuticles will cause massive tangling when there are inverted strands.

Perhaps those who use the wording ‘European quality’ are to be commended..But when is anyone going to put the label ‘Indian’ on it? Well that could be an outcry.